When the SweatSox made the move up to Tier 1 this past offseason, we figured we might be able to throw teams off the first time through the schedule with our slow pitching & unorthodox playing style, and perhaps even back into a win or two.  Through 7 games we faced 7 different opponents, and every single one of them had very little issues adjusting.  Now that teams know exactly what to expect, the second set of games aren’t going to go well for your “Stittsville” SweatSox…

Our first second matchup of the year took place earlier tonight when the SweatSox took on the Athletics at McCarthy: where the mound has two rubbers, the infield is concrete, the outfield is soft, the warning track is mud, and where you could be hit by a stray bullet from any direction at any time.

As you probably guessed, the SweatSox didn’t get off to the best of starts, but it could’ve been much worse as just 1 Athletic run came around to score after 2 SweatSox first inning errors.  Ultimately, that run would be more than enough for the Athletics to secure their 6th win of the year, because for the 3rd time this season, the SweatSox didn’t score a run.

It wasn’t easy for the SweatSox to get shutout tonight, despite us getting to third base just once.  Check out the play-by-play from the bottom of the 4th inning, which perfectly summarizes the 2016 SweatSox season so far.

Once we figured out how to fit everyone into the circle, the Après Baseball Hyjinx was highlighted by the announcement that the Eric’s were finally engaged.  We’re not quite sure who asked who, but nevertheless we gave Eric our congratulations, and wished Mrs. Eric “good luck”, several times.

*MBond now has as many broken bats this year as we have runs.

Next up for the SweatSox is the dreaded weeknight trip to Kingston on Wednesday, where Josh Ramage will try to win over the hometown crowd just like Rocky did in Russia. 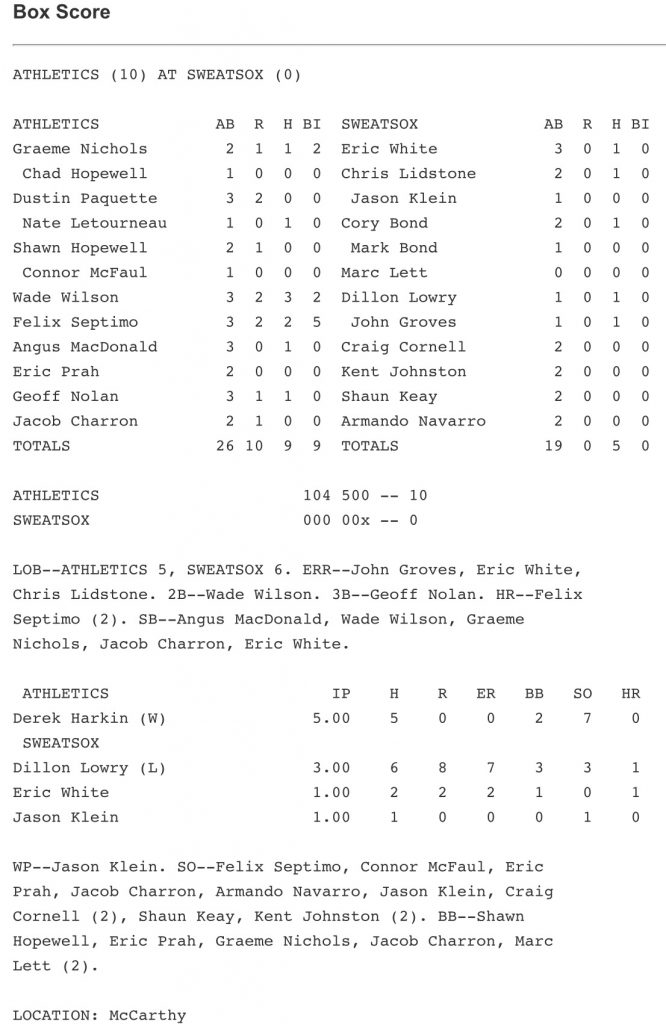