The Blue Jays beat the Tigers 6-1, Winchester swept the River Rats in Cornwall, and the Brewers Tournament was cancelled yesterday, making it the 2nd tourney this year the SweatSox weren’t in to get rained out.  This recap is obviously being written on Sunday, after the fact, which is music to Kent Johnston’s ears.

For the third and final time this year, and hopefully for the last time ever, the SweatSox and River Hawks faced off at that beach on Allen road in Quebec this past Friday night.  With this being the biggest game yet in the race for the 8th and final playoff spot, the River Hawks were up to their usual tomfooleries nice and early. Whether it was continuing their BP even though there was less than 30 minutes until first pitch, taking a longer infield than normal so we couldn’t get any reps in the sand trap, or qualifying 3 different pitchers in the top of the first to let us know that they were making the playoffs and we weren’t, we saw what they were doing.  That still wouldn’t stop us from shaking their hands though; it’s all part of the “game”.

The River Hawks would take a 7-0 lead through the first 4 innings of play, highlighted by Eric White (SS) calling a ball hit to shallow left field, only to be called off by Mark Bond (LF) at literally the last millisecond; a collision ensued, the ball hit the ground, an E7 was awarded, several unearned runs came around to score not long after, and both White and Cop walked away with a few new injuries.

We’d score a pair of runs in both the 5th and 7th innings to make it interesting, capped by a 2 run name-changing double by Larry, but a well timed River Hawks pitching change in the rain essentially crushed our dreams of a 2nd year in Tier 1.

*Wish we were at #brewtourn; we miss the players, teams, and umps!!#L1

While it may have been a bad night for the SweatSox playoff chances, it was an even worse night for SweatSox helmets.  Both Kent Johnston and Chris Lidstone let their lids know that they were not at all satisfied with their performance.  And while I didn’t personally witness it, based on historical evidence Dillon “Larry” Lowry had to have smashed his at some point too.

The Hyjinx featured some rain, some pain, and a plot to sell Mindy to the highest bidder (Techno), where the cash would then be laundered through the nearby casino before making its way to the local strip clubs.  Everyone wins.  Stay tuned for updates. 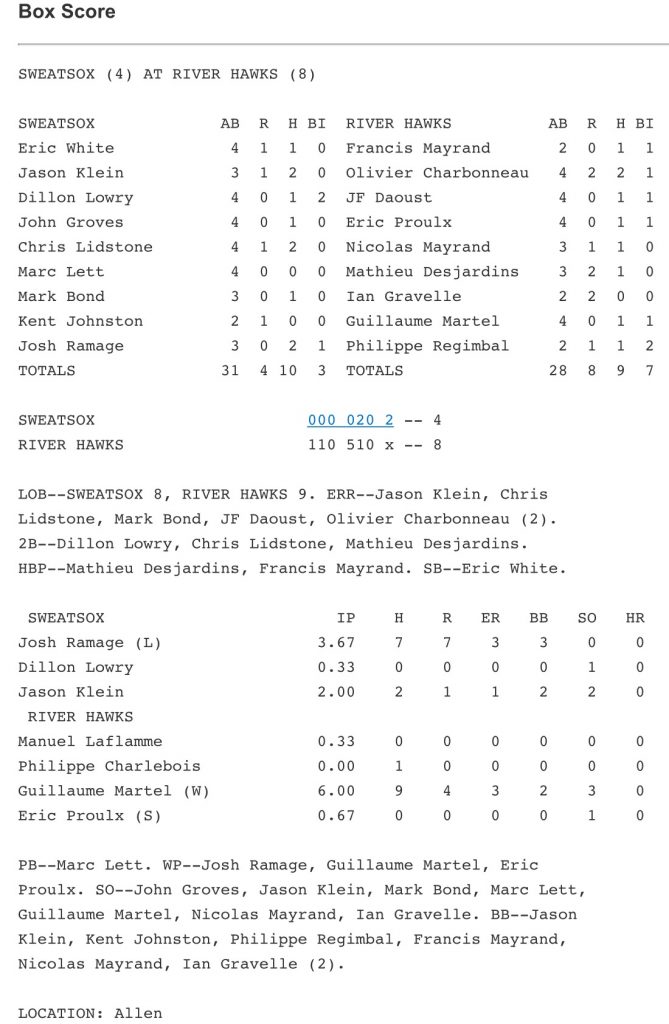 Next up is the highly anticipated Battle of the Greybeards, as John Groves (SweatSox) will battle Steve Smith (Panthers) this Friday night in Kanata.  At a combined age of 169 years old, this grudge match will undoubtedly be the oldest pitching matchup in Tier 1 history.  On the undercard, if Marc Charbonneau is able to throw a few hard fastballs in relief, we’ll make sure he gets a shot at revenge against Josh Ramage, even if we have to bat him out of order. 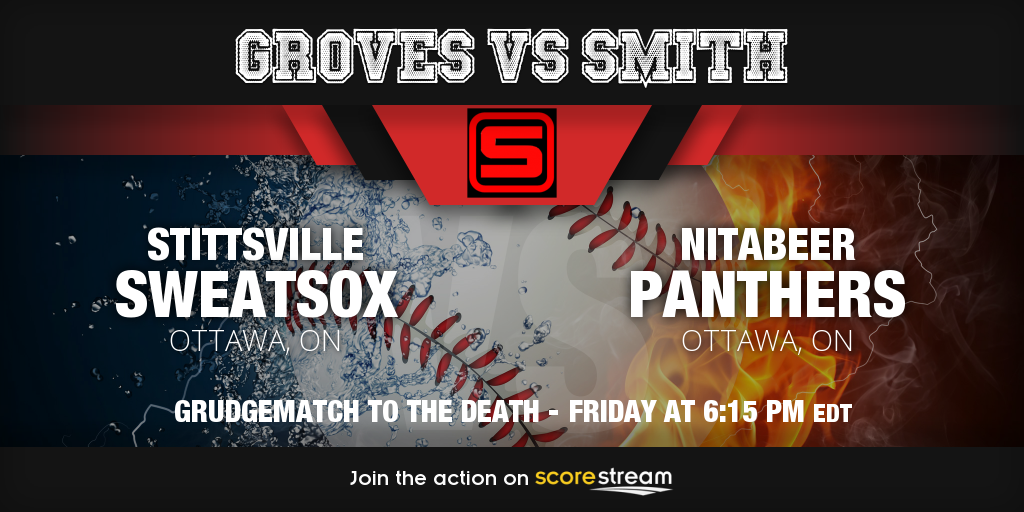