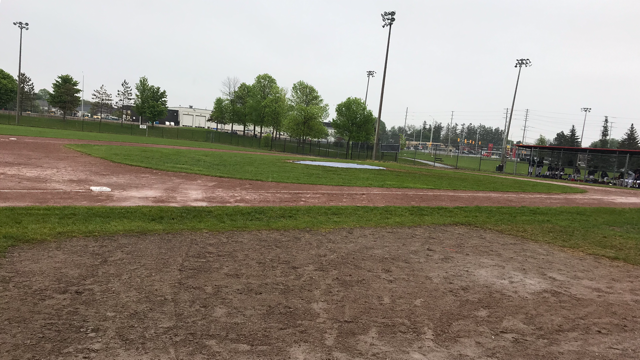 Last Sunday night, the SweatSox were scheduled to face Team Cuba at 8:30pm in Kanata. At 10:08am that morning, we received a message from our Authority Cory Bond that he had cancelled it.  WTF?

A SUNDAY TIMELINE OF EVENTS

7:32AM– The NCBL Tweetmaster sends out his daily preview of the day ahead.  12 games originally scheduled, minus the 2 at Heritage already cancelled by the City (I’m told the dogs figured out how to open the gate and went to town all over the infield, there’s piss, poop, and semen everywhere. Dogshit!).

8:43AM– The Bytown Battalion, excited to get Josh Soffer to 5-0, send out their morning gameday tweet.

9:10AM– Annnnnd the Battalion game gets cancelled.  They don’t have to travel to Cornwall.  Lucky them.

9:39AM– The Capital City Cubs’ game in Kingston is cancelled.

9:51AM– The Kingston Ponies confirm both their games are cancelled.

9:52AM– Cory Bond visits the site of our game, sees a few wet spots, panics, then tells us he’s cancelling the game.  Chickenshit!

9:53-AM-10:07AM– The SweatSox spend the next 14 minutes trying to talk him out of it. Everybody is furious.  Ross Hughes can’t believe a game he could actually make isn’t going to happen.  I, Shaun Keay, wasn’t even going to be at the game but I made it clear I wanted this game to happen for the rest of my boyz.  Eric White pointed out that we’d be the first Ottawa game postponed today, everything else was out of town. Craig Cornell noted that we don’t have to make this call until 7:00pm, so why make it at 10am?  Even Kent Johnston, who would trade his firstborn child for the best seat on his couch to watch the Raptors game, couldn’t believe a cancellation was even being discussed.

10:08AM– The Authority confirms it’s a done deal.  Citing the well-being of his fellow teammates, potentially unsafe field conditions, the trend of cancellations across the league, and some nonsense about having a feeling there would be tornadoes in the area later that day, the game is officially cancelled.  Horseshit!

10:11AM– I, Shaun Keay, regretfully confirm the cancellation of our game via Twitter. I was still hot, basically felt like Drake here… Got to looove the Drake.

11:38AM– The Mudd twitter account, which is always a few hours late to the party, confirms their game in Kingston has been cancelled. We know guys, we know.

12:09PM– Marc Sports announce their game in Cornwall is cancelled.  They don’t have to travel to Cornwall.  Lucky them.

12:14PM– CBond has to be feeling pretty good about his decision at this point.  7 of the 12 games are cancelled, and it’s only a matter of time before the other 5 are too.  Monkeyshit!

3:55PM– Momentum shifts a few hours later when the Rockets announce they’ve checked Trillium out, and it’s good to go.  Could the fields actually be playable? Who could’ve seen this coming, besides everybody?

6:00PM– Outlaws vs Expos, the early game at Kinsmen, begins and ends as scheduled.

8:09PM– NCBL final scores start to pour in, while we’re all sitting at home begrudgingly watching the Raptors game. Thanks for nothing coach. Pieceofshit!

11:14PM– The SweatSox decide that as a result of this extremely questionable managing decision, Cory Bond will be suspended from the starting lineup for our next game: Wednesday vs the Coyotes.  Whether he even makes it into the game at all is yet to be determined.