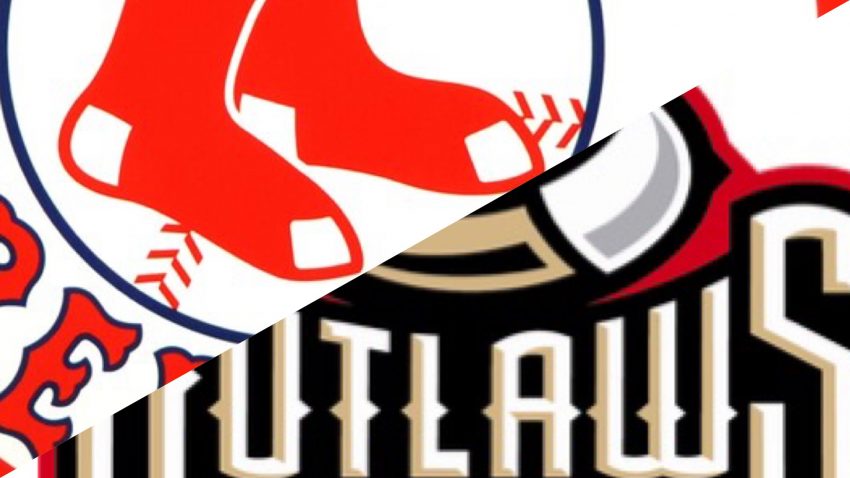 SPORTSPLEX– The Sports Aux Puces Red Sox staved off elimination last night in Game 3 of the 2019 Tier 2 Championships, defeating the “No All-Star” Outlaws 12-8.

The Outlaws won the first two games of the series, 6-5 and 10-3, and were poised for the sweep with ace Jeremy Pluym on full rest set for the start.

Armando Navarro, who was once part of an organization that overcame a 2-0 Tier 2 championship series deficit (sup Cornwall?!?), was seen right before first pitch motivating his new team with an emotional pregame speech.  This obviously fired up the Red Sox, who plated 5 of their first 6 batters in the top of the first, highlighted by a Phil St-Martin 2-run single.

Tony Carbonetti and Ron Martelle, who were once upon a time Outlaws themselves (before being Outlawed by the Outlaws they left behind), took care of the scoring for the Red Sox in the 2nd. Antonio lead off with a triple, and Ronald knocked him in on a ROE RBI.

The “Panthers of Tier 2” weren’t going to let the Red Sox run away with this one (yet), answering with 4 runs of their own over the first 2 inning; trailing by just 2 through 2.

Both Pluym (2x Tier 3 MVP) and Dave Rotari (2004 Hurricanes MVP of the Tier 4 Playoff Quarterfinals) settled in and kept runs off the board in the 3rd and 4th innings, leading to the first big decision of the night in the 5th:

With 2 outs and the top of the order coming up for the 4th time, but with one of the most unpredictable yet predictable runners in the world standing on 1st (SPOILER: he’s going to run on the first pitch), the Outlaws removed Pluym (who’s pickoff game is weak) from the game, turning the ball over to the bullpen to keep things close.

Relief pitcher Garrett Brown had issues finding the strike zone, leading to the first of 6 Red Sox runs to cross the plate on the bullpen’s watch.  Brown didn’t have any issues finding actual Red Sox though, plunking 2 of the 3 he faced.

The Red Sox lead was 12-4 heading into the bottom half of the final frame, but they had to sweat it out just a bit when the Outlaws put together a little rally that eventually brought the tying run “in-the-hole”.  The outcome of this one was never in doubt though.  Red Sox win 12-8.

The Outlaws won’t have to wait long for another opportunity at hoisting their 3rd Tier 2 Championship trophy.  Game 4 of the Tier 2 Finals takes place tonight across the border at Allen Parc.  Feels like a Nick Hall (Outlaws) vs Justin Deroy-Dunn (Red Sox) kind of night.

Elsewhere in Tuesday night NCBL action, the Bytown Battalion defeated the Kanata Athletics 10-1 at Kinsmen, with Josh Soffer picking up his 4th playoff win, and 16th total win of the season.

The Battalion now hold a 5-1 points advantage in the Tier 1 Finals, and will look to close it out tomorrow (Thursday) in Kanata with a win (or a tie).