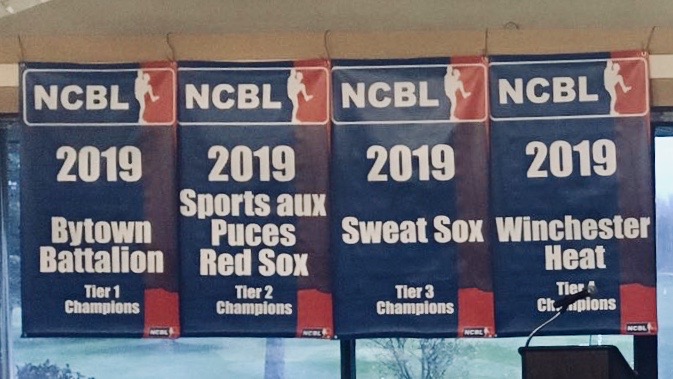 PINEVIEW– We’re nearly 24 hours removed from yesterday’s 2019 NCBL Banquet, and reports are MC Joe Beelen is still on the podium presenting the lifetime achievement awards to the 1,000+ players who at one point in their careers suited up for the Braumeisters, Braves, and/or Brewers.  Just 200 more names to go Joe, hustle up.

It was a warm, humid, one might even say “sweady” evening inside the Pineview Golf Course Banquet Hall last night where 178 people, including at least 2 wives, were celebrating the NCBL’s 30th season.  Once again, the Beelen family did an amazing job setting up the event, although 3 banners were conspicuously absent from the rafters (this would be the first of many NCBL slights the SweatSox would encounter throughout the night):

The biggest issue for everyone in attendance had to be the pre-dinner beer line.  If you went to buy beer at the wrong time, you could’ve be trapped in line for 10 or so minutes, stuck beside someone like a Mark Bond or Pat Lyons; actually, Lyons wouldn’t be so bad.  Hey Pineview: get a cash-only “Bud-Bud Light” guy walking around from table to table selling beer.  More money for you, more beer for us. You’re welcome.

Dinner was served slightly later than the 7:30pm time we were originally promised. We later learned that the cooking staff had to heat up a few extra racks of ribs in preparation for Marc Lett’s arrival:

TIER1: The bread & butter of an NCBL Banquet is always the award presentations. Tier 1 has the most individual hardware to give out every year (8), including the exclusive Best Catcher and Manager of the Year awards.  Unsurprisingly, Josh Soffer won all 8 Tier 1 awards (he didn’t, but you could probably make a case that he makes any catcher and manager look that much better when he takes the mound 20 times a season).  What a season he had though.

Here’s the unofficial list of the winners at last night’s banquet. Couldn’t remember every one, it was tough to hear over Mike Whittaker yelling nonsense across the room every minute or two.

TIER2: After being shunned for years by the voters, the Outlaws finally walked away from the banquet with a couple pieces of hardware and a couple ALL-STAR nods (finally)!!!!  They didn’t technically “walk away” though since they were never actually there to begin with (kind of like how they didn’t show up for games 3, 4, and 5 of the Tier 2 finals this year).

TIER3: The SweatSox had finalists in all 4 of the individual Tier 3 categories, but we ended up batting .250, slightly lower than my (Shaun Keay) average this year. The 7th place Capitals were the big award winners (.750): the Ginja Ninja took home Tier MVP and Best Pitcher, while Brandon Lacroix was our tier’s top Sportsman.  Eric White, of the Swead Sox, was named Best Batter and was our lone All-Star.

TIER4: The Winchester Heat dominated the banquet just like they did Tier 4 this year; I believe they were just a sportsman away from sweeping the awards (Heat nominee Chris Embury really let his team down here).

The SweatSox would like to congratulate ALL the individual award winners from ALL the tiers, except of course for Eric White.

The NCBL is run entirely by volunteers, well except for Joe Beelen who demands an extravagant yearly salary for all the work he claims he does.  Every year, the Commissioner recognizes one of those volunteers at the banquet and presents them with the Joe Beelen Volunteer of the Year Award (and yes, Joe requires financial compensation for the use of his name on this trophy).  This year, the honour was presented to longtime NCBL Treasurer Craig Cornell, whose creative accounting has not only saved the league hundreds of thousands of dollars during his tenure, but he’s made it so the SweatSox pay $0.00 in league fees every year.  Congratulations Craig, here’s to another 14 years on the job!!

We don’t know why, but for some reason the final award of the evening was the Tier 3 Playoff MVP.  Actually, we do know why: Joe hates the SweatSox and purposely skipped that award, clearly listed on the program, to try and screw us out of some hardware, and some wood.  I’m kind of shocked he didn’t successfully lobby for the Playoff MVP to go to someone on the Orioles.  Nevertheless, the SweatSox had several worthy candidates for the Finals MVP, each with their own unique merits:

Eventually, Kent Johnston was officially named Playoff Finals MVP.  The King of Consumption led the team in runs scored and on base percentage, and somehow only got out 4 times in 4 games against a really tough Orioles pitching staff.  Congrats KJ!