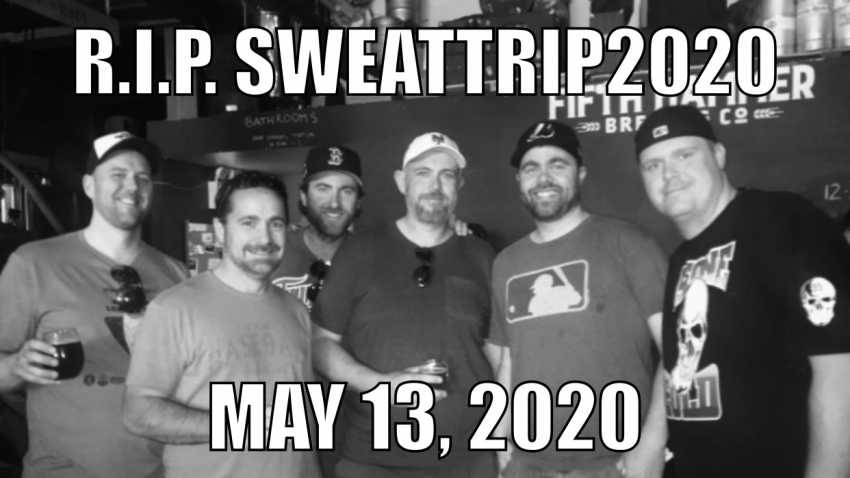 Today is not a good day. Earlier this morning in another timeline, 6 of your Stittsville SweatSox boarded a flight from Ottawa to Dallas (via NYC), officially kicking off this year’s version of the annual SweatTrip. Unfortunately, Ross Hughes let one of his many STI’s get away from him, infecting the world, and cancelling our travel plans indefinitely.

Originally, the 8-day 7-night 7-game SweatTrip started off in Arlington and finished in St. Louis, with stops in Houston, New Orleans, and Kansas City along the way.

The MLB games we had tickets for were some of the best matchups we would’ve seen yet, making this cancellation that much worse:

Along with being unable to watch any live baseball, we also will not get a chance to explore the sights and sounds of each city’s culture.  Here are just some of the pre-planned activities we had locked-in for #SweatTrip2020:

Perhaps most importantly, we need to know the best places to find a drink in each city.  After probably somewhere between 68 and 70 hours of research, here’s every place we would’ve stopped in for a pint or two or fourteen at, all of which are Kent Johnston’s Star Rating approved:

To counter all that beer, we needed to balance it out with the right amount of BBQ. Here are just some of the places we had reservations at:

All of that was just the stuff we had pre-planned, who knows what else we would’ve done on the fly.

It really would’ve been a great trip. I asked each would-be SweatTripper what they were looking forward to the most:

MARK: All the walking I was going to make everyone do between breweries.

CRAIG: I was really looking forward to seeing some great ballparks, the Negro League Museum, and hanging out with a fine group of men eating barbeque and enjoying some cold beverages.

KENT: Oh boy. Endless BBQ and beer. I was going to eat all of the bbq.

JOSH: Astros games in Houston. Been a fan of the team as Jeff Bagwell was one of my favourite players growing up.

I, SHAUN KEAY: Nothing specific, beer, baseball and friends in Texas. What’s not to look forward to.

With #SweatTrip2020 now in our rear-view mirrors, it’s time to start looking ahead and planning #SweatTrip2021, not to be confused with #SweatVegas2021.

COMING SOON: More Things I’ve Learned So Far In Quarantine, Recap of the NCBL Spring Meeting, Recap of the Top Secret Super Classified NCBL Executive Meeting, and if I have time maybe a few thoughts on the 2019 Tier 3 Championship Series.