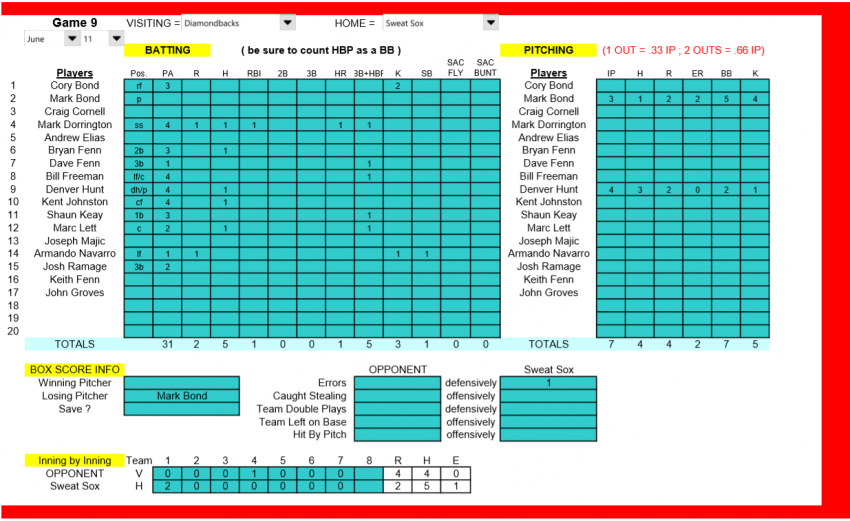 Today, we’ve gone back to June 11, 2008, when we took on the Diamondbacks at Southgate, not necessarily for of the on field action but for the wild night of tomfoolery that followed.

I NEED A FLAP FOR MY TOILET

Last night, the SweatSox and Diamondbacks faced off at SouthGate for the second time this year, with the first matchup ending in a 10-6 SweatSox loss. After a few hours rest, the Bus Cop determined he was fit for his first start of the year so the Sox sent him to the mound; the D’backs provisional pitching rotation countered with a rookie of their own, and we had ourselves a game.

(12 years later, Cop has a record of 7-7. We miss the days when his pitching was frequent and good)

Offensively, I’m thinking the only SweatSox hits were from Kent Johnston, Marc Lett, Bryan Fenn, and Mark Dorrington…who knows. Dorrington also had the only SweatSox RBI, after he crushed his second homerun of the year to deep left field, against the wind. In his next at bat, Dorrington broke his second wood bat of the GAME, making him the first person to break a bat (2 bats) during the regular season, earning himself a year’s supply of our favourite performance enhancing drug: Cialis. Congrats OMS.

(Dorrington’s swings were so hard, his bats were constantly losing their structural integrity with the high speed contact. An entire forest was lost that year to fully replenish his arsenal)

The much anticipated Après Baseball Hyjinx took place at the Conroy Pub: home of the “Napkin” & Seductive Eyes origin story.

Billy Freeman got the Hyjinx off to a good start by paying for two of three first round pitchers, and remarkably was able to throw back his beers effortlessly despite some chest pains from “maxing out the chest protector” when catching the last couple of innings.

(Lett says the chest protector hasn’t been the same since)

SweatSox Center Fielder Kent Johnston then did the unthinkable; he tried to order food off the menu! Any Conroy Pub regular could tell you that the kitchen closes at like 5:00pm, but Johnston was clueless.

(There are always things to eat at the Conroy Pub, if your eyes are seductive enough, and you’re brave enough)

Things continued to take a downward spiral once the team found out that there were no ladies on site, so it was at this point the first ever Hyjinx ‘Pub Switch’ took place and the Sox returned to more familiar surroundings, the friendly confines of Boston Pizza (Conroy/Walkley).

(It’s always a good idea to get in and out of the CP as quick as possible. A few years later we missed an actual shooting by a matter of minutes thanks to an earlier than usual departure)

After losing a few members of the team during the switch, the core group of Hyjinx’ers found their way in and were greeted by the friendly BP Hostess, who looked very familiar to some…more on that later. As the team was being seated, they were treated to a beautiful radio medley of Kris Kross’ Jump Jump and Sir Mix-A-Lot’s Baby Got Back; the SweatSox were home!!

(These days most of us are too old to jump, and we’re not so much interested in “back” as we are our own “balls”)

Boston Pizza then did what most fine establishments do when a group of 10 sit down, they asked the team what they wanted to eat and drink. Bond ordered his traditional Three Cheese Toast, Cornell grabbed his customary Potato Skins, Hunt ordered his favourite: the “Lasagna”, and Freeman grabbed a large pizza, a pound of wings, a poutine, the New York Striploin Steak Sandwich, a Caesar salad, and a team pitcher of Coors Light.

Unfortunately Billy found out that there has to be at least 3 people sharing the team pitcher, so he was forced to share with his teammates.

As the night went on, a second team pitcher was purchased but Freeman wouldn’t have any part of it. Bill described how he is working on the responsibilism, as he had to pick up Shannon by midnight and under no circumstances could be late.

As he finished off a custom made Wednesday Fishbowl, normally reserved for Fridays, Billy stormed off en route to the SilverCity. While warming up the big blue truck, Freeman noticed that one of the “Mark’s” on the team had a flat tire, on the back-right side, so Freeman took it upon himself to single handedly fix this ill-timed accident. We’re not sure if Freeman made it to the pickup on time, but if he didn’t, please blame it on: “Mark”.

Long after Bill finally left, Josh Ramage cut himself off from the beer; and when confronted about this non-SweatSox like maneuver, Ramage explained he only has his G2.

(The SweatSox remind everyone to always drink responsibility)

It was at this point the team shared their experiences, thoughts, and tips to ensure Josh passes his G-test. Some of the better tips included don’t roll a stop sign, always yield to pedestrians, obey the speed limit, but the best piece of advice was from Denver as he shared a story about his car being ‘a few fries short of a happy meal’ the day he took his test, and it stalled. If the car stalls, 3 times, on your test, you fail.

(Josh thought we were messing with him, so he did the opposites: rolled a stop sign, didn’t yield, sped, and brought extra McFries for the instructor. He did not pass)

The Hyjinx then came to a close and some final pictures were being taken. When asked if the waitress would pose for a picture, she declined.

When asked if the SweatSox could get a picture of her hand picking up a business card left on an adjacent table, she declined.

Next up for the SweatSox is a matchup at Faulkner on Sunday against their opening day opponent, Les Acadiens Moosehead, at 1:00PM. Both Dave Fenn and Cory Bond are sitting on 2 games rest (probably the first time this has happened to both of them), so look for one of them to start the Father’s Day game.