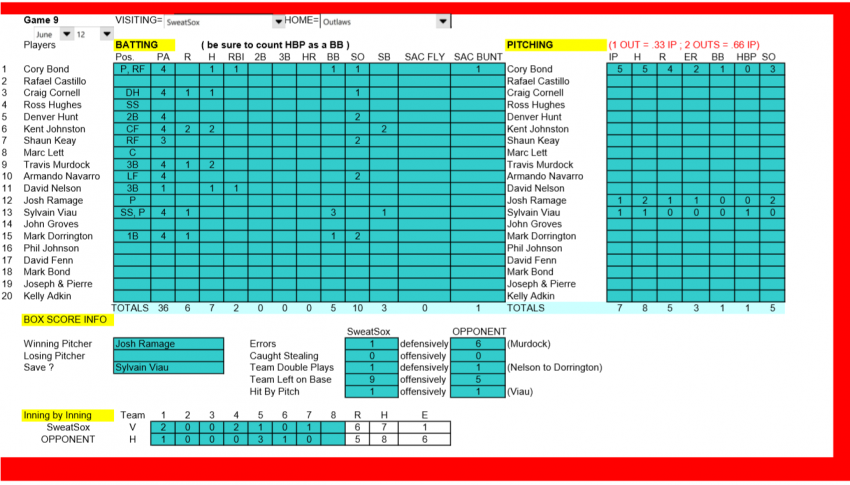 As a special website bonus, I’ve taken the old recap for this game from the black & white Courier site and remastered it in HD (with modern day commentary):

After only being benched for 2 of the 59 innings the SweatSox have played so far this season, I’m very thankful that many moons ago I decided to purchase a hypobaric chamber for my expensive Kanata home, because without the use of this ingenious contraption I’m not sure my current on base percentage would be .400 right now. Moreover, we’re coming off a big win against the Outlaws yesterday, and there’s only one way Shaun Keay celebrates a win over the defending champs: I take a stroll into my walk-in humidor, track down one of Cuba’s finest, and then smoke it like Kent’s ears would smoke if he ever observes somebody not recycling, aka a Code: Blanka.

(It’s actually Stittsville. You’d think I would’ve known that in 2011).

THE SITE IS ON STRIKE

SweatSox-Outlaws Round 3 took place yesterday afternoon at Faulkner, with a scheduled pitching matchup of our GLE: Cory Bond versus whoever was capable of throwing a ball 60 feet 6 inches for the Outlaws; reports indicate Martelle & Lacroix were in Vegas, another dude was bungee jumping, and McGee had thrown against us on Friday. Although the odds were in our favor, you just knew the SweatSox would keep things interesting.

(We K’d 10 times, so whoever they did throw was half decent)

The SweatSox jumped out to a 2-0 lead in the top of the first after a wild pitch scored Kent “Johnson”, and an RBI single from Cory scored Mark Dorrington. The Sox would add two more runs in the 4th, and another in the 5th to take a 5-1 lead heading into the bottom half of the 5th. At this point the GLE had retired 12 Outlaws in a row, but that streak came to an end after an E-FatCat put a baserunner on, eventually leading to a couple unearned runs, and a one run SweatSox lead.

ON THE EPILEPSY SCALE, IT’S A 3

Remember last game when we reported Josh Ramage guaranteed himself a win the next time he pitched? Turns out he wasn’t kidding, because in the 6th Josh blew the chance at tying Cory for the all time saves lead by giving up the tying run, setting himself up for the dirty win.

(These days we call that a vulture)

Sensing he let our great lefty down, Josh then nearly committed suicide by calling of the OMS on an infield fly ball, originally called by the OMS. Josh lived to tell about it though.

(Josh getting W’s, by any means necessary)

I DON’T THINK SHE WIPED

Tied heading into the 7th, Travis led things off with a base hit, and then was sacrificed to 2nd on a Bond SAC-BUNT. On his way back to the dugout, our Authority had a vision, and promptly made what at the time was a controversial managerial move, pulling Ramage from the game and sending David Nelson to the plate. RBI single, SweatSox lead 6-5.

(Since Craig’s resignation as manager in 2008, the SweatSox have always been a small-ball team)

THERE’S A PAD IN THERE

The Outlaws had an even better opportunity in the bottom of the 7th to score multiple runs, putting the first two men on. I guess someone missed a sign, because after an infield fly, there was a game ending 5-3 double play. Who was playing third base? David Nelson. The Authority had put him there, knowing he’d be put in a position to make a play – it was another great executive decision. Sylvain Viau picked up his first career save, tying him for 11th on the all-time list.

The winner of the 2004 A&W Kamloops International Baseball Game MVP is the dynamic duo of Cory Bond and David Nelson. As mentioned, Nelson had the game winning RBI and turned the game winning double play. Cory was 1/2 at the plate while facing the big shift on D, and while pitching in his 99th career game for the SweatSox, threw 5 innings of 5 hit 1 walk ball, with 2 earned runs and 3 strikeouts. Big shoutout to my cousin Jon who studies the website and knew heading into the game Cory was only 1 strikeout away from #400, and sure enough showed up to witness this career milestone.

The Après Baseball Hyjinx was hosted by David Nelson & Sylvain Viau. It should be noted that Nelson was late for the game yesterday; not because he was rushing to the beer store, but because he forgot about the game while watching racing on TV. At least he brought the beer, and won the game for us. Forgiven. Shoutout to PtOF who we think was hovering around the circle early in the Hyjinx! Shoutout to Ross who left the circle before his old man! Shoutout to the cigar that was sitting in Marc’s car for several months, and then smoked by Marc!

(Marc did not puke)

The SweatSox have had some memorable games over the years. Who could forget Doug Dorion’s 3-hit game against the Dukes back in 1992, the same game he rallied the troops by demanding a King Sized inning from everyone. Remember when I recorded a hit in my first ever NCBL at bat back in 1998? What about when Cornell and Massey went back to back in 2003? The time Cory took Commissioner Beelen deep twice at McCarthy? When the SweatSox beat the Old Sox to win the Tier 3 championship? The Mr. Winchester game? 20-18? While those were all very memorable, the most notorious game though took place on August 2, 2006 in the rain against the Gryphons. That was the game that led to the most famous text message in SweatSox history: “Army went deep, OMS lost, Robert quit”. Well during yesterday’s Hyjinx we learned something about that game that we’d never heard before. We knew OMS pitched 6 2/3 innings that game, and Cory threw the final out, but nobody really remembers who made that switch – until now. Army says HE did.

*** THIS MARC LETT QUOTE HAS ALSO BEEN CENSORED ***

When Mr. Hyjinx 2009 finally met Shawna, he was not disappointed. She remembered the SweatSox, she remembered all our previous orders, she inquired as to whether Kent had actually showered after our last time there or not (although at first she thought I was KJ), and then she even proceeded to describe in detail the troubles (Lana Epar) she was going through inside the restaurant.

WHAT, NO MENTION OF GLE’S BEER SPILL?

Next up for the SweatSox is a matchup with the Athletics next Sunday at Faulkner. We’re not quite sure who will and will not be there, but I’ve got a sneaky suspicion that a Code: ORANGE may be in play.