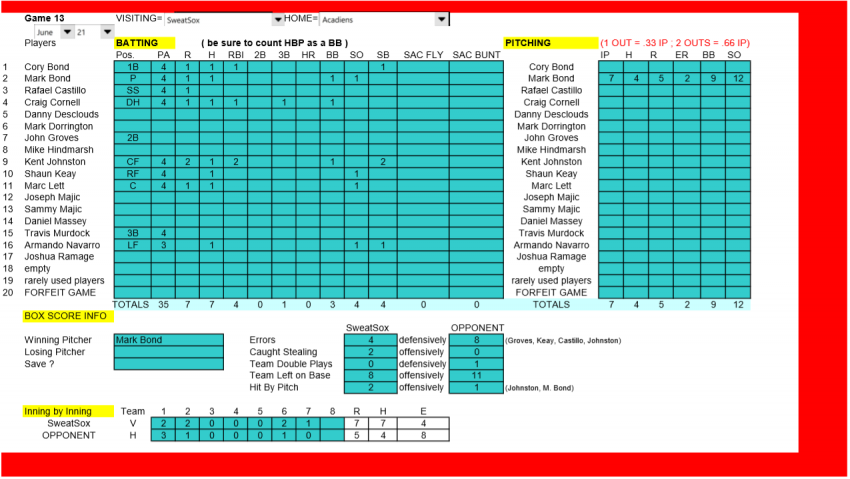 DADDY, WHY ARE THEY CALLED THE SWEATSOX?

On your marks, get set, go. On a night when the great Heritage Park Canine vs Raccoon Hunt of 2009 was taking place in the woods, the SweatSox and Acadiens were meeting for the second time this season. After struggling in his start on Friday, Mark Bond was thrown right back in the line of fire when he was given his second consecutive start with hopes of making it at least through the first inning.

(These days a SweatSox pitcher would’ve been benched indefinitely for assaulting another team like Cop did the Athletics. Unless it was Eric, or Liddy if he was a pitcher.)

Before Cop could take the mound, the Sox got their at bat and after two errors scored the leadoff man Kent Johnston, and then another error off the bat of Cory Bond scored Craig Cornell; the SweatSox were up 2-0. That lead would last only a few minutes, because in the bottom of the first three SweatSox errors led to three Acadien runs; at least Cop survived the inning (no-hit streak ended with the leadoff batter)!

In the second a leadoff single from Marc Lett led to an RBI single for the Director, who scored one batter later off the first SweatSox wood bat single, and first career NCBL triple, for the Consultant. The Acadiens would tie it up at 4 in the bottom of the second after Cop hit the leadoff batter and then proceeded to throw 3 consecutive wild pitches, advancing the runner all the way home.

The score would remain tied until the 6th inning when the SweatSox added two more runs which included the second RBI of the game from the ACF, who was eventually tagged out at second base off the extremely rare 1-8 pickoff. K “where were the base coaches” J took some comfort in hearing that it was the second time the Acadiens had pulled off that play this year, and from the on-deck circle the HRK breathed a sigh of relief knowing that the 9-3 he fell victim to earlier this year was finally surpassed.

(LOL – The ole’ 1-8. Poor KJ. It would be just over 10 years until someone fell victim to that move again, when our John Groves (1) and Cory Bond (8) pulled it off on Oickle last season)

The Acadiens answered with another run in the bottom of the 6th and trailed by only 1 heading into the 7th. After a leadoff single from Cory was followed by a single from me (Shaun Keay), Rafael Castillo got the sign to push both runners into scoring position. After a bunt attempt failed miserably, thanks in part to bad advice from the Bus Cop, a passed ball saved Raf and moved the runners over anyways. After some heads-up base running from our fearless manager, the final Sox run crossed the plate.

(It’s no surprise that most of our great victories involve small-ball, or attempted small-ball)

Up 7-5 in the bottom of the 7th, Bus Cop FINALLY settled down and struck out two of three to end the game. Mark pitched seven innings of four hit ball, giving up two earned runs, nine walks, with twelve strikeouts to earn one half of the 2004 A&W Kamloops International Baseball Game MVP Award. But who would he share it with? It could have been Travis, who had he worn his contacts would have went 4/4 instead of 0/4 (see Travis Tracker)…

(9 walks and 12 strikeouts, those are the worst games to be out of defense. Much more exciting when Josh pitches: 0 walks, 0 strikeouts)

This game in particular will probably be remembered for all the oddities that occurred throughout the contest, for example here’s a taste of what went down:

(These days, we call that a Wednesday)

IF I WERE SINGLE, I’D TAKE HIM

If all that happened during the game, just think about the Hyjinx that went down Après Baseball. The first Hyjink of the night was to retrieve the raccoon from his cylindrical home, and adopt him into the circle. Before he could fully appreciate what the SweatSox were all about, he was given a shirt, bat, and glove and he took the field so he could hit a few balls and catch a few flies; then and only then would he be accepted by the team. Check out his adventures in the Pictures section. For his effort, the P&P Raccoon was awarded the second half of the 2004 A&W Kamloops International Baseball Game MVP Award. Where is the medal anyways?

After going over the game breakdown with our new mascot, the topic of Kent’s E8 came up, who admitted to the error and subsequently withdrew his protest of the ABCX Controversy, citing the chance of a “perfect season” was no longer in play.

With the night coming to an end and with the Bus Cop unable to finish his beer, he performed what is believed to be the first ever intentional beer spill. As a result of this misconduct, Cop will be benched for the next game, which happens to be this Wednesday against the Raiders at McCarthy. Après Wednesday’s game, it has been announced that the first ever UFC Night will be taking place, as players will take turns battling each other in the world famous Octagon.

Stats for the game last night can be found in the Statistics page.

(They most certainly are not there any more)

Feedback or comments can be sent to feedback@sweatsoxbaseball.com. We read, and appreciate, each and every one of your emails.

(You can probably still send something to that address, but we haven’t check it since probably 2009)