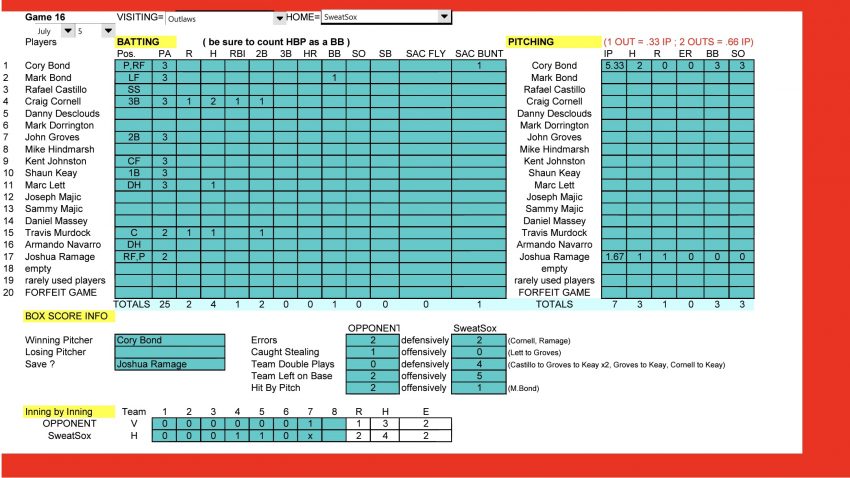 THE FLY BALL TO JOSH THAT KENT CAUGHT

Last night, the SweatSox took on the Outlaws in their fourth and final regular season match-up of the 2009 season. With the season series tied at 1-1-1, this game could have playoff tie-breaking implications so there really was only one person the Sox could send to the mound to get the job done: Mark Dorrington. Unfortunately, the OMS was not available so they had to settle for lefthander Cory Bond.

It wasn’t looking good for The Authority early on, as his pregame warm-up was delayed when he had to hand-write a lineup after receiving a cryptic communiqué from Armando Navarro, who sent the text message “Wdpd”. It took a few minutes, but after realizing Army was referring to the Wisconsin Dells Police Department, who are notorious for being late, we knew Army wouldn’t be making it by game time.

(This was not the first, nor would it be the last time that Army got confused about which direction to go and when)

After throwing 3 warm-up pitches, ‘Stu’ promptly called game-on, and we were underway. Cory walked the first batter on 4 pitches, but got the next batter to ground into a 6-4-3 double play, then got out of the inning on a routine ground ball to Rafael Castillo.

“NEXT TIME HIT HIM”

In the second, once again the Outlaws got the leadoff batter on base, but like the first inning the SweatSox turned another 6-4-3 double play to end the threat. There were no double plays in the 3rd inning, and Josh Ramage was quick to point out that Cory still hadn’t recorded a strikeout yet. In the 4th Bond struck out the side in order.

(It’s all about efficiency. Why strike someone out on 3+ pitches when you can get them to ground out in 1?)

The SweatSox opened the scoring in the bottom of the 4th after a Craig Cornell lead-off double was followed by a sacrifice bunt from our HomeRunKing (CBond); then two batters later Sexy Eyes crossed the plate after a Bus Cop ROE.

In the top of the 5th Cory got out of the inning with the help of the third SweatSox double play of the game, this time thanks to Craig at 3rd who caught a liner then promptly threw out the runner returning to 1st.

(Craig wasn’t old back then, so he did not hurt himself on the catch, or on the throw!)

The SweatSox added a second run in the bottom of the 5th after Travis Murdock settled for a double (but should have hit a HR if not for a gust of wind, see Travis Tracker) then scored on a Cornell RBI single.

(Cornell was feeling it in 2009, and would go on to win his 2nd Doug Dorion Memorial Trophy that season)

(Do we need a Liddy Tracker?)

With one out in the top of the 6th and after hitting an Outlaw with a pitch, Cory requested a session with the Consultant, who advised him his day was done. The GLE turned the ball over to Josh Ramage who quickly got the second out, and Travis ended the inning when he threw out a runner trying to steal second.

(Ramage was put into a prime Vulture position, but couldn’t get the job done in the 6th)

Looking for a “legitimate” save, Josh took the mound in the 7th and with the help of a SweatSox franchise record 4th double play of the game, recorded career save number two, while the GLE picked up career win number thirty-eight.

(Usually it’s bad defense that screws Josh out of a win, this time it was good defense that kept him from the W. He’ll take the save though)

Offensively, the SweatSox walked only once and didn’t strike out at all. The 1 walk, a HBP to the Bus Cop, was the fewest since being asterisked by the * two years ago, and the 0 strikeouts appears to be a modern day franchise record. The third franchise record set last night was the actual length of the game; previously the record was the SweatSox vs Old Sox game, better known as the original OMS game that lasted 1 hour and 22 minutes; last night’s game finished in 1 hour, 19 minutes, and 46 seconds – 2 minutes and 14 second quicker.

(The SweatSox have always known how to get the job done quick; Just ask our wives. Hey-Oh!)

WE HAVE A PUBLIC URINATION

Individual honourable mentions go out to:

I DID NOT LOSE MY HELMET AND GLOVE

According to the SweatSox schedule, the Après Baseball Hyjinx was scheduled to be hosted by Mike Hindmarsh. This prompted several SweatSox to ask the question: “Who is Mike Hindmarsh?” With MIA Mike on the beer, it was a given that the SweatSox were victims of yet another Code: Orange. Knowing we were going to have A&W winning performances and needing to celebrate, Craig and I stepped up to avert this most horrific of emergency codes, and the end result was a double beer Hyjinx.

(No seriously, who is Mike Hindmarsh? Is he Litoris?)

IS THAT A KEG IN YOUR PANTS…

The extra beer appeared to be too much for the Director, who after a visit from Mrs. Kent + 2, committed career beer spill number one. The ACF tried to recover by telling a bunch of amusing narratives, including:

(Kent still sees the bus pass cover guy, who also now calls out every stop on the bus)

…CAUSE I WANT TO TAP THAT ASS

The Hyjinx continued with a joint operation between the Bus Cop and the Murdock. The task was to stack empty beer bottles on top of the cooler; one SweatSox reportedly described this operation: “like two monkeys trying to discover fire”.

WHAT IS A BEER PONG

The rest of the Hyjinx was centered on ‘Empty Beer Bottles in a Box Pong’. Travis led the way and after hours of practicing he was ready for his YouTube moment, a one time chance to bounce it in and be a legend forever…

(This shitty video has 9,700+ views on YouTube, I guess it has a couple keywords in the title that generate random interest. Only Cory’s HR video has more views on the SweatSox channel, at over 1.4 million)

With both teams calling it a night, well the Outlaws leaving first since nobody outlasts the SweatSox (unless we have somewhere better to go), we decided to take a few pictures of the leftover mess from both teams.  On the left, you can see the Outlaws carelessly left their empty case in the middle of the parking lot, with a few un-wiped spills.  On the right, you see the SweatSox put all their empties back in the cooler, and cleaned up all peanut shell & beer spill messes.

I DON’T HAVE A BIG LIP TO NOSE RATIO

And finally, the Bus Cop continues his push for the Mr. Hyjinx 2009 title with a red nose, pornstache, and quirky comment:

(Could somebody please boot this guy)

Next up for the SweatSox is a return trip to Aydelu to take on the Tribu for the final time this regular season.  OMG is scheduled to host the Hyjinx, while Cory has volunteered to host his second BBQ of the year.  It is still undecided where the second half of the double header will take place, suggestions?

Stats for the game last night can be found in the Statistics page.

Feedback or comments can be sent to feedback@sweatsoxbaseball.com. We read, and appreciate, each and every one of your emails.