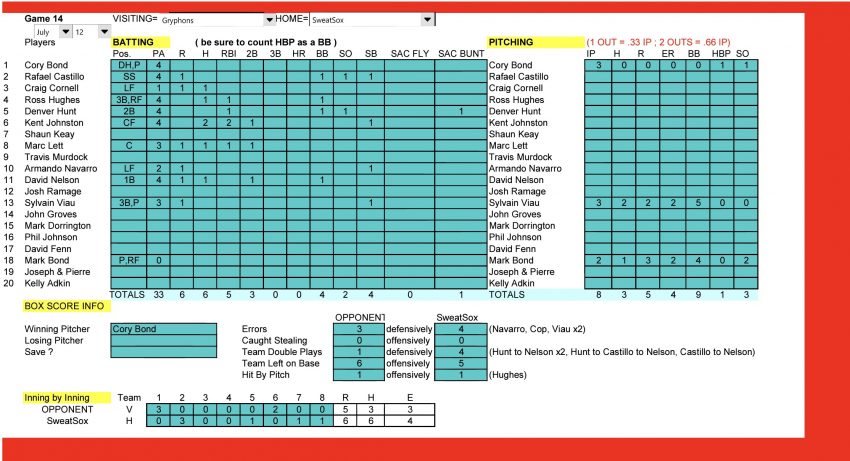 The first of three games in four days took place last night at Heritage, where the SweatSox hosted the Gryphons in their 3rd of 4 match-ups this season.

Needing a win to not only kick off this important three game stretch properly, but to keep the momentum rolling coming off a win 3 days earlier, everyone expected Bond to take the hill. Everyone was correct…sort of. While the Bond didn’t start, a Bond did, the Bus Cop! Fresh off a 6-month expedition through the African jungles, Mark Bond made his return to the SweatSox lineup.

(Mark would go on to play 8 games for the SweatSox in 2011, pitching in just 1, this one. So it probably doesn’t go too well)

Having not thrown a ball since his last game last season, The Authority thought it would be a good idea to throw his little brother into the water to swim with the sharks.

(Cory still believes this in 2020, but literally, not figuratively. Bring on the killer sharks!)

As expected Cop struggled through the first inning, at one point walking four Gryphons in a row, which drew some weird sounds from center field. For anyone who has not seen that before, don’t worry, that was just Kent morphing into the Angry Center Fielder (ACF).

(Kent makes these same angry sounds on the golf course too)

Fortunately, the SweatSox turned their first of four double plays and got out of the inning. Cop threw a 1-2-3 second inning, striking out two before getting the hook from big brother.

(4 double plays? The Gryphons must have some slow runners)

ON HIS LAST DAY WITH THE PLAYBOY; ARMY BREAKS WOOD

Fast Forward to the bottom of the 7th – with the Gryphons up 5-4 and the SweatSox down to their final out with the bases empty, The Authority made the call to pull Armando Navarro in favor of a pinch hitter:

(I don’t say this enough, but the SweatSox are so lucky to have such a great manager, who is able to analyze every situation and come up with a brilliant strategy that works just about every time; and when it doesn’t work it’s not because of the decision, it’s because we let him down)

The Authority opted for plan B. The Consultant got his base hit, and then down two strikes The Director knocked him in on a big-time RBI double. To extra innings we go!

(The Powers That Be really came through for us here)

IF I DON’T SLIDE I WON’T GET HURT

Using a rather ingenious pitching strategy, The Authority was able to send a relatively fresh GLE out for the 8th inning. Cory came into the game in the 6th in relief of Sylvain Viau, who pitched 3 innings of his own. GLE retired 9 of the 10 batters he faced (1HBP), including a quick 3-up 3-down 8th.

With the umpires declaring that no matter what this was it, it was either a tie or win for the Sox. The HRK tried to end it with one swing, but came up about 114 feet short.

(Shame we weren’t playing in Winchester. Would’ve been a no doubter)

Rafael Castillo was up next and drew a walk, and then was given the Mexican steal sign and advanced to second.

(Cory is the all-time SweatSox leader in IBB with 14)

With the winning run still at 2nd, Ross “The Merchandise” Hughes stepped up to the plate and knocked the ball into RF, scoring Castillo from 2nd after some creative juking/bending to get by the Gryphons catcher. SweatSox win a thriller, 6-5.

A&W’S FOR EVERYONE – ALMOST

For the first time in SweatSox history, the winner of the 2004 A&W Kamloops International Baseball Game MVP is split between 12 deserving players. Here’s a quick list of who and why:

(Did Cop really deserve a piece of this? We probably could’ve just given it to 11 of the 12)

While there were many great plays late in the game, an honourable mention goes out to Sylvain Viau and David Nelson, who in the 5th inning teamed up to perform the cleanest 3-1 putout in SweatSox history. Hopefully Cory and I can be as smooth next time we’re put in a similar situation.

(The SweatSox still struggle with the 3-1 to this day)

The Après Baseball Hyjinx was hosted by #12 Army Navarro, who knew we all had a long drive home so he brought Pabst Blue Ribbon LIGHT. Marc Lett then made a solid contribution, bringing team cigars to the Hyjinx for the first time this season.

(Cory is beginning to sweat)

Did he know that we’d have a walk-off win in extra innings, did he know that this was Army’s last game for a couple weeks, did he know the OMS Mark Dorrington would come out and watch our game, or was he doing whatever he could to try and climb back into the Mr. Hyjinx 2011 race? Whatever his motives, the gesture was appreciated; but he still has a long way to go to regain his Mr. Hyjinx title.

LIMITED TIME OFFER: OMS IS SELLING SOME SIGNED MEMORABILIA AT A DIAMOND NEAR YOU

As mentioned, Armando will be gone for the next couple of weeks. Navarro will be headed down south for some much-needed R&R, where hopefully he’ll make peace with the baseball gods and come back better than ever. For those who may be interested in following Army on his drive down the coast, his east coast tour will be stopping in the following major metropolitan areas: Portland, Boston, Springfield, Providence, Hartford, New Haven, Bridgeport, Albany, New York, Jersey City, Newark, Philadelphia, Wilmington, Baltimore, Washington, D.C., Virginia Beach-Norfolk-Newport News (Hampton Roads), Raleigh-Durham, Charlotte, Charleston, Atlanta, and Savannah.

Next up for the SweatSox is a match-up with the Metcalfe Mudd on Thursday at the Sportsplex. Josh Ramage is scheduled to take the hill.

I, Shaun Keay, better be scheduled to play somewhere after sitting all 8 innings yesterday; although I can’t really blame The Authority this time since he did offer me a spot in the game, and I refused.

(I played the entire game at 1B, and made 1 error)

Maybe he doesn’t appreciate my sub .200 batting average in the lineup? If so, don’t worry boss, I’ll be practicing non-stop over the next two days in the batting cage I have in the basement of my expensive Kanata home. I’ll be ready for Thursday.