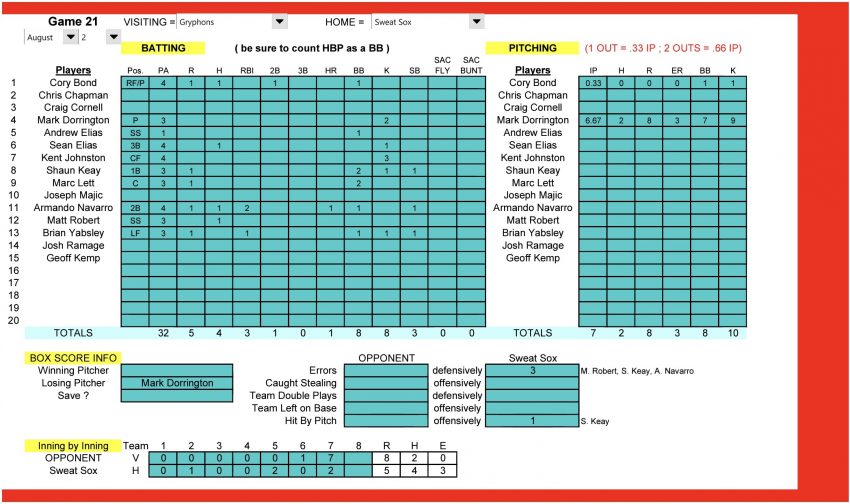 Today, we’ve gone back to August 2, 2006, when we took on the Gryphons in the rain at Southgate.

It was a classic showdown last night at Southgate between two quality teams in the Gryphons and the SweatSox. It was a pitchers duel through six innings, with the Sox taking a 3-1 lead into the 7th, with two outs, nobody on, and OMS on the mound.

(I still really like our chances of winning this one)

Unfortunately, the Sox couldn’t close it out because a bit of rain, some walks, and an untimely (and apparently career ending) error all led to seven more Gryphon runs.

(Big thanks to Army at 2B for finally pulling Dorrington when he did. Could’ve been much worse)

Not dead just yet, the SweatSox then looked for a two-out comeback ourselves; a Marc Lett walk was followed by the first ever NCBL homerun for Armando Navarro (and possibly the first of his lifetime) to bring us within 3.  The SweatSox then put the next two batters on base which brought the Cory Bond, the tying run, to the plate.

Unfortunately for us, at this point the on deck batter had quit the team ten minutes earlier (with no subs) which effectively ended the game as only a homerun could have forced a tie.

(Cory swung for the fences, but came up about 200 feet short)

(Kudos to the Gryphons for actually pitching to our GLE; they could’ve intentionally walked him and gotten the guaranteed W)

For the first time since it’s introduction to the team, there was no winner of the 2004 A&W Kamloops International Baseball Game MVP award.

(A bit of an overreaction here; probably should’ve given it to Army)

The Sox now have another extended break, this time thirteen days off until their next game against the Tribu, where they will look to sweep the season series and secure a spot in this years playoffs.